For my oldest Followers, I began doing posts on my blog a few years after the Harry Potter film series wrapped up. And with the new Fantastic Beasts And Where To Find Them movie coming out in theaters about a month, I decided it would feel appropriate to review the final two films, i.e. the best ones. The first half of the final installment of this British fantasy franchise opened on November 19th, 2010, grossing $960.1 million worldwide. Fair warning, this review is going to have big spoilers in it for fans, so read at your own discretion. Adapting the first half of J.K. Rowling’s final novel in the series, the story picks up roughly a few months after the death of Albus Dumbledore. The world is growing darker, Hermione has Charmed her parent’s memory, and the Dursleys have abandoned Harry Potter for good. A couple days before he can turn seventeen years old, The Order of the Phoenix moves Harry to the Weasley Burrow, with Polyjuice Potion creating six decoys of him. An ensuing chase with the Death Eaters results in the sudden and tragic deaths of Harry’s owl Hedwig and Mad-Eye Moody. That scene, in particular, is easily one of the most entertaining moments of the movie, and certainly the most intense. Ron, Harry, and Hermione then receive three gifts from Dumbledore’s last will and testament: a Deluminator for Ron, The Tales of Beedle the Bard for Hermione, and the first Golden Snitch Harry ever caught in a game of Quidditch. The day of Ron’s brother Bill Weasley’s wedding with Fleur Delacour, the Ministry of Magic is taken by Lord Voldemort and the reception is interrupted by a group of attacking Death Eaters. Having been Disapparated and now on the run, the trio now go around England searching for Horcruxes, seven little pieces that, if destroyed, could finally end Lord Voldemort. Getting it right off the bat, I’m a huge fan of the Harry Potter books, as they were what got into loving reading more and more. When I heard about the plans for the final book to be split into two movies, I had mixed feelings. On the one hand, it could have a chance to be more faithful than previous entries, but then it feels like Warner Bros. was trying to squeeze more money out of my pockets. Thankfully, the last two movies of Harry Potter are arguably the closest to the pages out of all of them. The first movie really deals out like a road movie, as the trio spend a majority of the movie in the woods or somewhere else searching for the Horcruxes. Because of this, however, the plot really slows down when they have downtime. Almost as if nothing is happening. I will say that most of the movie felt like a big exposition since much of the time is spent filling in backstory for certain main characters, specifically that of Albus Dumbledore. The deceased Headmaster of Hogwarts may appear lovable on the surface, but underneath is a man tortured by guilt of the things he’s brought upon those he loves. Namely, his conflict with Gellert Grindelwald resulted in the accidental death of his sister Arianna. This adds fallible layers to a great character, hampered by Michael Gambon’s marvelous performance. Anyway, in the last act of the movie, after Harry, Ron, and Hermione have destroyed a Horcrux locket, they learn of the Deathly Hallows via The Tale of The Three Brothers. Basically, three brothers cheated death and in exchange received a powerful wand, a Resurrection Stone, and a Cloak of Invisibility. Though Death eventually claimed each brother, the three items went missing, later named a myth called the Deathly Hallows. They learn that Dumbledore had attempted to find all of them, but are suddenly interrupted by a group of Snatchers who kidnap them and take them to the Malfoy Mansion. It was a very intense chase sequence with quick cuts in cinematography and excellent sound design. This was followed by a rather uncomfortable interrogation scene with Bellatrix Lestrange. Remember the chick from Order of the Phoenix that killed Sirius Black? Helena Bonham Carter returns as a crazy, evil, and wholly despicable villain who’s arguably worse than her superior. But the gang escapes with fellow captives Luna Lovegood, Ollivander, and the goblin Griphook. They Disapparate to a beach house the Weasleys own. There, Dobby suddenly dies from a knife wound, and no one is able to save him. It’s a heartbreaking scene that gets me crying every time I watch because even Dobby wasn’t in the movies for much, he was a truly innocent character who didn’t deserve any cruelty. But the final scene was when Voldemort went to Dumbledore’s grave and took the Elder Wand. Because his wand has the same core as Harry’s, the Dark Lord needed a powerful wand to truly end Harry Potter. This sets the stage for the next movie. Overall, despite pacing issues and an exorbitant amount of exposition, Deathly Hallows Part 1 was a solid fantasy road trip thriller that keeps you intrigued. I recommend watching this movie before Part 2. It will make things easier to understand. 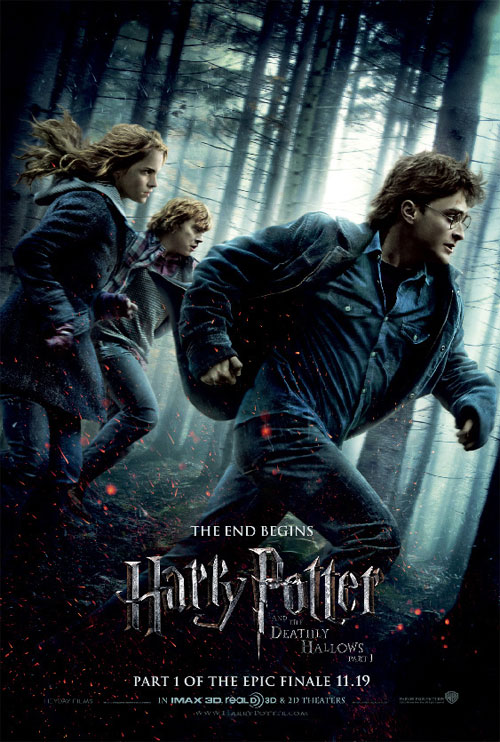