The mediator between the movie and the audience must be the reviewer. This silent epic science-fiction drama from Fritz Lang- based on the novel by his wife Thea von Harbou -was released worldwide on January 10th, 1927. Despite its universal acclaim in the modern era, contemporary critics dismissed it and only barely made back 1% percent of its budget of 5 million Reichsmarks.But today, it is frequently listed among the best and most influential pictures in cinematic history, and for good reason. Set in the (not so) distant future of 2026, the gigantic titular city is inhabited by an array of wealthy, pretentious industrialists who revel high skyscrapers. Underneath it all, workers break their backs to ensure that the city keeps running and that the big machines are in mint condition. The whole city is run by the master and mogul, Joh Fredersen, who really wants nothing more than to keep his high societal status. His son,  Freder, a humble man, realizes how corrupt this system is, and sets out with a young and beautiful woman named Maria to fix what has been wrought. Does that sound like a familiar premise? Absolutely, because Metropolis was the original dystopian story, film or literature. In fact, it was also the first feature-length movie of the science-fiction genre, clocking in at about 2 hours and 33 minutes. Well, at least that’s how long it was at its initial premiere before getting severely chopped down by the studio for commercial reasons until much of the film was restored in 2010 at 2 hours and 28 minutes, which is the version I watched. Though some of the footage is still lost and replaced with modern texts, the restored footage is stylistically different with a dirty film grain and smaller frame. But it still adds to the experience. I promise you this: If there is a franchise in the genres of sci-fi or dystopia that you hold near and dear to your heart, Metropolis paved the way for it. In his breakthrough role, Gustav Fröhlich is excellently convincing as the young Freder. Often frightened by his new surroundings, he has little to no experience in the lifestyle he tries to enter. In an age where heroes are seemingly able to adapt to completely alien situations at a moment’s notice, it’s nice to see a protagonist who has little clue as to what he’s doing. Right by his side is Alfred Abel as the conniving Joh Fredersen, Rudolf Klein-Rogge as a Frankensteinesque madman bent on a powerful creation, Heinrich George as the pragmatic foreman of the machines underneath the big city, and Brigitte Helm as the pseudo-goddess of the working class. Helm is particularly memorable as Maria, showing a great capability of compassion even in her most fearful state. She also shares a dual role with the Maschinemensch, a man-like robot who is used to carry out the wealthy’s agenda. This android is undoubtedly the most iconic aspect of the film and is recognizable to any film buff, regardless if they’ve seen the movie or not. Released during the Weimar Period in Germany, the G-rated film was one of the last in the mostly forgotten movement of Germanic Expressionism. For the unfamiliar, this was a movement of many different arts, including painting, dance, architecture, and cinema. Very few words are needed to describe what is happening onscreen and is all part of the creator’s stylistic logic. Everything that you see in the background is just as important and as interesting as what’s happening in the foreground. Speaking of background, the Art Deco and the production design are simply stunning, even by today’s standards. Everything, from the paintings of distant skyscrapers to the intricate machines of the underworld, took nothing but time and heart- for days on end, perhaps. Although the accompanying soundtrack has likely changed many times over, the score for the 2010 restoration is breathtaking. Recorded by the Berlin Radio Symphony Orchestra, it mostly comprises large bombastic tracks with huge horns and percussion during some of the more exciting scenes, while switching to high strings and piano for emotional character moments. Metropolis is not just entertaining black-and-white eye candy, though. Its story delivers important themes such as the gap between social classes, mass production, the dangers of industrialization, and American modernity. The lattermost category is reflective of the Roaring ’20s, or the “Jazz Age,” which was occurring at the exact time of the film’s release. Like many socialites of that era, many of the wealthy people would rather drown in excess and meaningless parties than pay attention to the world around them. Even in the climax, when everything is coming to a head, they still don’t care. In fact, this was arguably the first movie in the so-called “social science-fiction” subgenre, which used futuristic settings to explore themes and concepts regarding human nature. At a time when all anyone wanted to see was the next movie featuring Charlie Chaplin’s The Tramp, this is especially brave. It may be over 90 years old and have some minor middle-act pacing issues, but Metropolis is still a relevant cautionary tale about what would happen if class warfare was allowed to flourish. Easily the most influential science-fiction film ever produced, it also stands as proof that not a single line of dialogue has to be spoken in order for a movie to still be engaging, grippingly powerful, and moving. And- dare, I say –Metropolis is the single most impressive and ambitious silent film ever created. 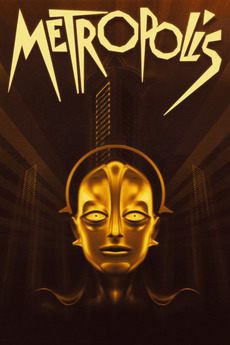