Why did the Batman franchise fall? So that it could learn to pick itself up. Or at least when a competent filmmaker is given the reigns of it all. This superhero thriller drama debuted in June of 2005, going on to earn just under $375 million at the worldwide box office and helped propel this comic book property to critical heights. After nearly a decade of dropped directors, budget deficits, and scrapped ideas, (Including an early version of Batman v Superman) Warner Bros. finally hired director Christopher Nolan to reinvent the DC character, who at that point had only been known for Memento. The PG-13 rated plot ultimately takes the origin story of Batman, one of the most iconic fictional characters in American pop culture, in a dark and gritty direction. After billionaire Bruce Wayne witnesses his parents get murdered, he leaves to join the mysterious League of Shadows to learn the ways of justice. Years later, he returns to Gotham City and uses his money and resources to fight crime on the streets as the masked night-time vigilante known as Batman. After the disaster that was 1997’s Batman and Robin, so many comic book fans were skeptical that a relatively unknown director could bring one of their favorite characters back to life. At this point he had become a joke of a hero, what with plastic nipples and Bat-Credit Cards. But Nolan not only accomplished this goal with flying colors, he also made a great movie in general. Future Oscar-winner Christian Bale plays Bruce Wayne/Batman and is absolutely perfect in the lead. He essentially plays a triple role; the real Bruce Wayne around his butler when he’s being himself, the vigilante caped and cowled in the night, and the facade of Bruce Wayne that most of Gotham’s people see him as- which is a drunken billionaire playboy who cares about nothing except money and women. And watching this man carelessly bringing European girlfriends to a hotel that he immediately buys out for a new swimming pool is rather funny. Speaking of funny, Michael Caine’s Alfred Pennyworth brought both a fatherly figure and a great sense of comic relief without it feeling forced. He often offers our hero some great advice before he dons the outfit to fight more crime, but isn’t afraid to say what’s really on his mind. Liam Neeson shines as Bruce’s temporary mentor, Henry Ducard, in a role right before the man became a flat-out action star. Other veterans in strong supporting roles include Morgan Freeman as the technologically helpful Lucius Fox, Gary Oldman as the one honest cop in Gotham James Gordon, Tom Wilkinson as the arrogant mob boss running the streets of Gotham City, and Cillian Murphy as an ironically insane mental doctor. Meanwhile, Katie Holmes as the main love interest feels like a shoehorned afterthought and would be better established in the nest installment. The action, like the rest of the movie, feels very gritty and grounded in reality. The character’s background in ninja expertise lends itself well, even if sometimes it looks a bit uncomfortable. This being only Nolan’s second big-studio film, his first foray into action scenes leaves a bit to be desired. But watching the Caped Crusader eliminating a gang of street thugs never gets old. In the first film of their long-running collaboration, Hans Zimmer composes the musical score in epic fashion. However, he brings on some professional help with fellow industry titan James Newton Howard. One of the more memorable superhero scores of recent times, the centerpiece consists of fast-moving strings building up to a horn sound off. Also worth noting are the pulsating electric drums in action scenes that help establish the tension. Batman Begins is also a fantastic film filled with thematic statements consistent with Christopher Nolan’s filmography. The most obvious of these is facing your fears, no matter how frightening it may be. Bruce Wayne as a kid is terrified of bats and still is as an adult. But he embraces his phobia and turns his dread onto his enemies. Proof positive that Batman is no laughing matter who sports plastic nipples and suits that can’t let him rotate his head. Joking aside, the titular character also seems to be looking for a father figure to mentor him in the realities of the corrupt world around him. Since his real father was murdered in cold blood when he was a child, Bruce has looked to both Alfred and Ducard for that hole in his personal life. This opens up an interesting philosophical dichotomy for the hero, with one side teaching him to counter a ruthless world with more ruthlessness and the other encouraging him to fight against corruption without excessive violence. While this film and The Dark Knight Rises were arguably overshadowed by the sequel to come, Batman Begins is a greatly realized and super satisfying start to a trilogy that’s among the proudest in its genre. Each time I watch it makes it better and remains a fine superhero movie. And Bruce Wayne doesn’t even do his cape and cowl until over an hour into the experience. That’s the craft and dedication they poured into it. 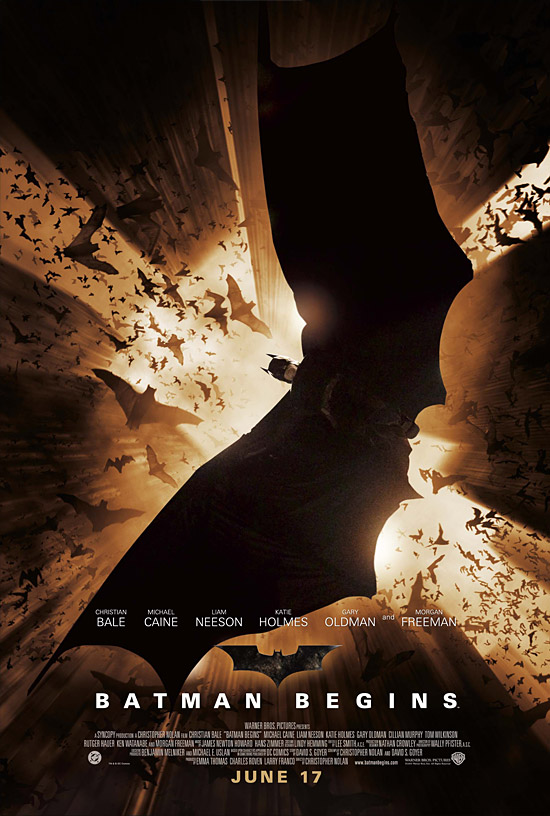