*Fair warning: This review contains some spoilers from the end of the first season.  Please catch up so I don’t have to be the asshole who ruins it for you.

Since the creators of this show are treating this second season as more of a sequel rather than a straight-up continuation of the series, I will approach it in a similar fashion. With as much objectivity as a reviewer that I can muster, of course. The second season of this science-fiction coming-of-age horror series premiered all 9 of its episodes on October 27th, 2017, generating high ratings and a feverish anticipation. Following the surprisingly massive success of the first season from last year, the creators, the Duffer Brothers, stated that writing a followup was the hardest thing of their dual career. Set about a year after the first season wrapped up, we pick back up with the characters in the small town of Hawkins, Indiana. Will Byers has escaped the Upside Down, but still is affected deeply by the experience, as are his friends and family. New faces come into town, and the gang tries to return to normalcy in time for Halloween of 1984. But there might be a brand new threat waiting for them in both the Upside Down and the government laboratory. Following up an impressive first season is difficult enough. But when that first season is for a show that has so gradually gained a rabid fanbase like Stranger Things, that’s even more difficult because you have to live up to the expectations of your fans. But the Duffer Brothers said this season acts more like a blockbuster sequel than a continuation of a television series. And that’s completely apparent because almost everything this time around is bigger and, in some ways, better than the first season. What I appreciated most about this season is that it dared to try different things than last time. The most obvious of these is the highly controversial 7th episode, which sees one of the characters take a detour away from the main action. Many fans hated it, saying it was unnecessary and pure filler. Personally, I thought it was delivering vital information and character development needed for that person, and in a way shows that there is a bigger picture outside of Hawkins. Could it have been done better? For sure. But the fact that they were willing to do the episode suggests new territory for them to travel through in the coming seasons. They tried something new and original, and for that alone, they deserve praise. By this point in time, all of the regular cast members have grown comfortable in their roles. Noah Schnapp is especially impressive as Will, always looking over his shoulder to make sure that the Demagorgon is never behind him. His personal arc is one of overcoming trauma and the repercussions of growing up afterward. David Harbour is great once again as Chief Hopper, this time more world-weary and cautious of his actions. He arguably has the best dynamic with most of the characters, particularly when he cares for Joyce Byers and a preteen Eleven, to whom he’s a close father figure. Some of the new characters were a mixed bag. 80’s stars Paul Reiser and Sean Astin were great additions, but Max and Billy felt a little out of place. Sadie Sink played Max well enough, but the way she was written felt like a typical young girl with unusual angst. Dacre Montgomery’s portrayal of Billy bordered on the edge of parody with a seemingly stereotypical high school bully. But the show-stealers this season have undoubtedly been Joe Keery and Gaten Matarazzo as Steve and Dustin. Their bromance was awesome and by far the most watchable part of the season. Meanwhile, this show continues to be a technical marvel. The steady camerawork by Tim Ives and Tod Campbell emulates films made by John Carpenter from the 1980’s. Not one single aspect of any scene is left unfocused or obscured by a shaky cam. Instead, it sustains a heavy and consistent atmosphere that this series has built so well. Also, the visual effects have been upgraded quite a bit. With the expansion of the world and the benefit of a larger budget, the Duffer Brothers got to be more creative. Some constraints are still noticeable, (This is a T.V. show after all) but the design for the new villain is utterly fascinating. Like if the ghost of H.P. Lovecraft had inhabited the mind and body of Stephen King and wrote a screenplay centered on a new monster in his universe. As with last time, the musical score for all 9 episodes is composed by Kyle Dixon and Michael Stein, also going by the band Survive. They continue to eschew the cliches of big boisterous orchestras in favor of synthesized melodies and beats. When it comes to the action scenes, they’re heightened and intense. But in the slower character-driven moments, it’s more emotional and subtle. At all times though, it feels like the unofficial soundtrack for a horror movie. Guys, it’s the same thing as last time. Stranger Things 2 is a worthy sophomore outing with an intriguing story and likable characters. Although I ultimately like the first season a little more, this followup is definitely worth a marathon or two on Netflix. I’m eagerly awaiting where this series goes in the future. 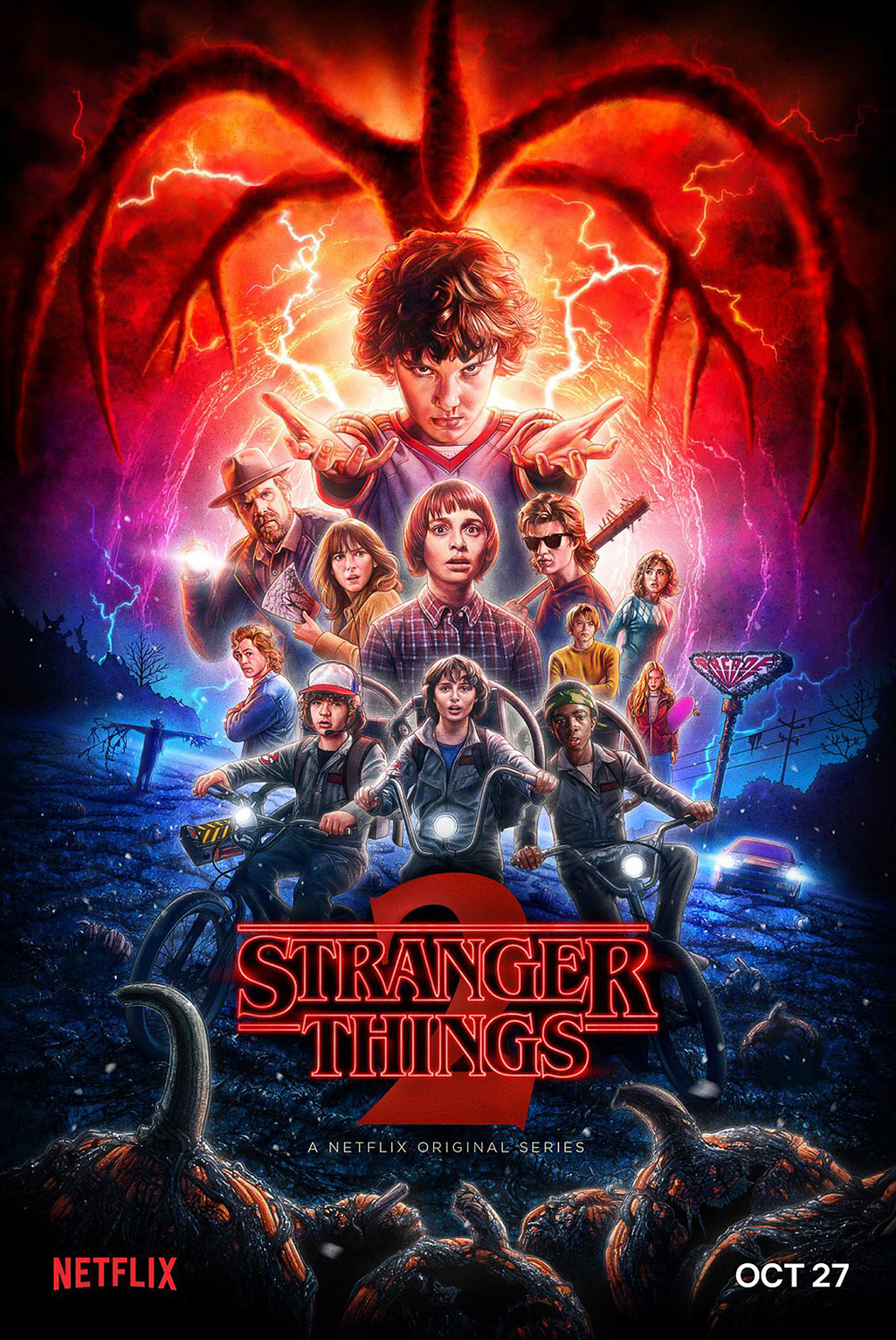