This film has been on my mind way too much for me to not write a full-length review of it. I’ll try my best, but I doubt I’ll get anywhere on the right track. Premiering as part of the U.S. Dramatic Competition section at the Sundance Film Festival, this experimental science-fiction drama was released on April 5th, 2013. Made for just the mere budget of $50,000, it went on to earn back over 11 times that amount during its theatrical run. This is the second feature film from writer-director/everything else Shane Carruth, 9 years after his debut Primer. The story follows a young woman played by Amy Seimetz who is trapped in a cycle by a complex parasite. During her torment, she meets and subsequently falls in love with a man in a similar condition, played by Carruth himself. As they try to put together the fragments of their past lives, they also try to find where it all started and break free. To say anything further would ruin the surprises of the story. It’s not like the movie lives or dies off of these twists and turns, but it goes in some very unexpected directions. And for that, I will remain silent. It has been a long time since I was unable to form a real opinion on a film after the first viewing, but that’s just the case with Shane Carruth’s Upstream Color. In fact, it’s so different and organic that I feel like calling it a “film” or a “movie” would do it an injustice. This was an experience. Now to let you know off the bat, I have not seen his debut feature Primer. For some reason, that one has been unavailable to me through the resources at my disposal. So as my first time with Carruth, I approached this one with a completely open mind because the synopsis was extremely vague and the trailer even more so. None of the reviews would tell me a single thing about it, and I’m glad they didn’t. Going into it cold without much prior knowledge was probably the best way for me to absorb this movie. That being said, I do feel like I should watch this movie a few more times to truly absorb everything that they were trying to say here. The film feels like a 96 minute-long metaphysical poem about the tests of love and dedication. At its most basic, Upstream Color is a romance story with characters who have been emotionally fractured and are trying to put the pieces back together. Even the parasite was replaced with something else like, say, a prescribed medicine, the message would still make sense. But this approach allows the story to become far more universal and abstract. It’s also a gorgeous movie to look at. Carruth is one of those “one-man-show” types of filmmakers, as he completed virtually every aspect of production himself. In a way, that allows his own unique voice to resonate with all departments of the filmmaking process. This includes cinematographer, where he crushes many different colors under a hazy palette. The bokeh-like photography is enhanced by David Lowery’s editing techniques alongside Carruth which cut away with many shots. There isn’t a single shot in the movie that feels misplaced. Every frame has a purpose for the story or its message. Carruth also tries his hand at composing the musical score, which feels right out of a film from the 80’s. Primarily made up of droning synthesizers with different sounds it helped add an ambiance and atmosphere that felt appropriate to the surprisingly melancholic mood. There’s one track, in particular, played near the end, that I keep looping on YouTube as a way of keeping me calm and relaxed. It doesn’t swell with big horns and strings. It just keeps the emotional undercurrent flowing throughout the runtime. However, this film is not made for everyone. I feel like I should inform you of that right now. It breaks many different conventions of storytelling and standard structure. The way the arcs unfold over the course of the movie don’t feel forced or contrived. It takes its time to show (and rarely tell) these two’s story go about. It demands the audience to remain completely engaged. Otherwise, not everything will make sense to them. I had to watch this film twice (back-to-back viewings, in fact) in one day to get a better understanding of it all. This isn’t your typical romantic drama or science-fiction movie. Upstream Color is a wholly original and challenging film that represents the power of singular filmmaking. Shane Carruth is a newfound treasure of American cinema and we shouldn’t lose him anytime soon. At the very least, I want to see what he can come up with in The Modern Ocean. 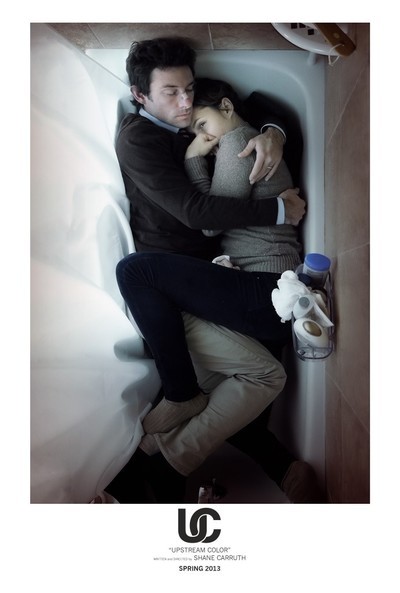