My 200th blog review!! So exciting for all the hard work that I’ve done!. Let’s celebrate it by reviewing a movie that nobody is probably going to see this weekend or even is expecting me to talk about. This Christmas drama from director Bharat Nalluri was released internationally in 500 theaters on November 22nd, 2017, only managing to gross about $600,000 within the first 3 days. Considering that it’s the Thanksgiving weekend and no one is seeing movies on Black Friday, (Except this guy) that makes sense. Based on the book of the same name by Les Standiford, the 104-minute story follows a rather fictional take on a very famous person. Charles Dickens, played by Dan Stevens, is struggling to come up with a new novel after his last 3 have flopped. With a tight deadline, he begins envisioning the story of A Christmas Carol around him and learns some of its own lessons for his life. In recent years, there has been a trend in Hollywood of telling the stories about some of the most popular stories ever crafted. In 2004, we got Finding Neverland starring Johnny Depp, telling how J.M. Barrie was inspired to create the world of Peter Pan. Earlier this year, Goodbye, Christopher Robin chronicled the dichotomy of Robin’s World War I experience with the lighthearted family-friendly story of Winnie the Pooh. And now we have The Man Who Invented Christmas, a movie I fully expected to despise because Christmas movies rarely strike a chord with me, especially ones in the modern era. But truth be told, I was actually taken aback by how enjoyable it was. Does that mean that it’s worth seeing in theaters? Eh, not really. The only reason I saw this was because 4 women in my family wanted to go see it, and I saw it as an opportunity to get away from the family for a couple of hours. The film is not without its moments, especially when we get inside the mind of Dickens in some really imaginative scenarios. But it follows the familiar story beats of almost any family Christmas movie that you’ve ever seen. At times, it felt like this film was originally set to air on the Hallmark Channel, but Bleecker Street picked it up for theatrical distribution at the last minute. To be clear, this is leaps and bounds better than the usual Hallmark schmaltz schlock put out every December. Dan Stevens has been having a wonderful year as an actor with Beauty and the Beast and the show Legion providing him some great success. Here, he divulges the best and worst elements of Charles Dickens, delivering some of the more sappy dialogue with Shakespearean authority. Christopher Plummer may be publicized for replacing Kevin Spacey later this year, but he deserves some recognition as the imaginary Ebeneezer Scrooge. He gives out some of the literary character’s most famous lines with almost deadpan delivery and provides some unique insight into the author’s dichotomous world. Other performers worth noting include Jonathan Pryce as Charles’ desperate yet warm father and newcomer Anna Murphy as the young housemaid Tara. They all do respectable jobs, but this is Stevens’ show through and through. And for what its worth, the technical production of it all is rather nice. The production and costume designs seem to capture the look and feel of the Victorian era London. Whether it was the prim and proper socialites or the dirty working class, what the characters wear adds just as much personality as the performances themselves. The cinematography by Ben Smithard contrasts between old-fashioned and musty Steadicam and modern sweeps across the setting. It also heightens certain colors particular to the holidays, such as red and green. Combined with the clever editing of Stephen O’Connell and Jamie Pearson, the camerawork makes for a whimsical take on the classic story we all know and love. Oscar-winning Life of Pi composer Mychael Danna provides the musical score for the film and it’s exactly what you’d expect. Big orchestras swelling up during some of the more emotional moments are pretty much par for the course in a Christmas movie. But it’s also some quiet melodies of the piano that come very close to hitting the audience in the feels. And then there a few moments when strings and percussion are somewhat bouncy, which serves well with the bizarre nature of Charles Dickens’ creative process. Speaking of process, this movie did speak to me, but not in the way most other people might think. For those of you who are new to this blog, I am an aspiring fiction writer, having crafted a handful of short stories. I am currently planning on my first novel, which has been in the works for a good number of years. However, I often run into that wall of writer’s block, and am currently stuck in a corner storywise. Watching this movie and seeing Dickens himself struggling with coming up with an incredible story was actually inspiring. Even the greatest of scribes have their problems, and that was more affecting than anything else in the movie. The Man Who Invented Christmas is a saccharine holiday tale fun for the family, but is not quite memorable. If you’re looking for a nice movie to watch with your loved ones over the holidays that’s not named Coco, go right ahead. Personally, the story didn’t do much for me, but I’m sure it might make you sniffle as it teaches you the tired lessons of the season. 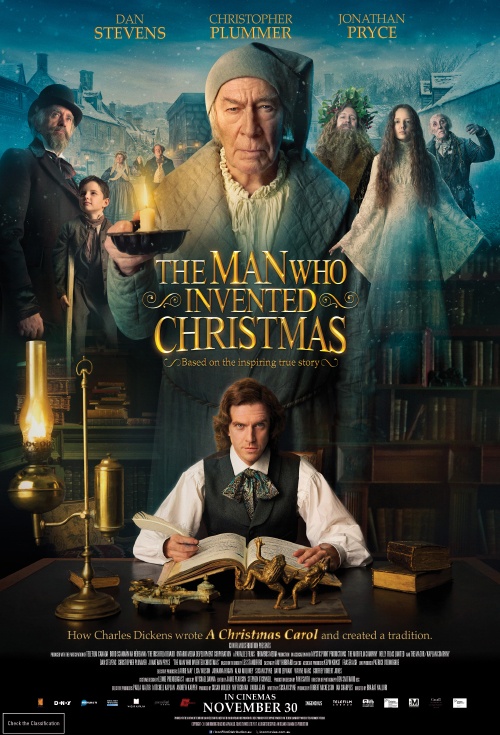