I didn’t know that originality still existed in zombie flicks. The world still has a few surprises in store for me. Released in theaters earlier in February this year, this post-apocalyptic horror drama made a lengthy run on the festival circuit the previous year, from Toronto all the way to the BIFF. Despite favorable reviews from critics, it only managed to earn back half of it’s $5 million budget. The craziest thing about this film’s production isn’t the fact that the book it was based on was written in tandem with the screenplay. What was more insane is the fact that the filmmaker Colm McCarthy got aerial shots of London by going to Pripyat, a part of Chernobyl. Adapted from the novel by M.R. Carey, who also wrote the screenplay, the story is set in an England following the breakdown of society due to a fungal infection. Anyone who is turned becomes a sort-of zombie called “hungries.” But one special girl named Melanie oscillates between humanity and damnation. With the help of a teacher, a scientist, and two soldiers, she embarks on a journey that may lead to mankind’s survival. I know what you might be thinking from hearing that premise: The Last of Us. Many people who have seen the film have compared it to the highly acclaimed video game by Naughty Dog, and indeed it does share some similarities from both a thematic and storytelling standpoint. You learn just the right amount of backstory to get the apocalyptic picture and see the characters in their current state. And as an enormous fan of the game, I was quite enticed to watch this horror movie. By the time the credits rolled, I was a mini-mess. This is a gorgeous and fantastically entertaining movie, horror or not. Much like The Last of Us, the focus is not on zombie violence. Make no mistake, the hungries are ferocious and allow for some really tense moments. But they’re almost secondary to the human drama and how the characters react to the situation. With most of the population wiped out and the children in danger of infection, humanity seems doomed. But along comes this girl with a special ability and high I.Q. Indeed, it does sound like familiar ground for the genre, and there might be some viewers who might not connect with a young girl in charge of saving the world. Even some of the characters question it, with one character saying, “Why should it be us who die for you?” There are long stretches of the movie with quiet, asking for patience from its audience. A total newcomer to the industry, Sennia Nanua is an absolute star as Melanie. Highly intelligent yet incredibly innocent, the film is often terrifying because we’re scared for what could happen for her. Gemma Arterton has struggled with films like Quantum of Solace and Hansel and Gretel: Witch Hunter. But here, she is captivating and compassionate as a teacher assigned with normalizing children on the military compound. When the main group is let loose into the British wilderness, she is the one that tries to keep everyone under a level head, unafraid to put her own life at risk. Meanwhile, Glenn Close impresses as Dr. Caroline Caldwell, a pragmatic scientist bent on finding a cure for the disease. She wants to help Melanie, but she has a hard time trusting anyone else, especially the hot-headed soldiers. And technically, The Girl With All the Gifts is an astounding motion picture. As I said, some scenes were shot near Chernobyl, which contributes to enhancing the oppressive and apocalyptic atmosphere of the picture. Simon Dennis chooses to film a lot of scenes with handheld cameras, but still keeps attention to what’s happening to the characters. A sequence where our heroes make their way through a field of still hungries in the streets of London was particularly terrifying. The couldn’t make a single sound, and each time the camera cut away to an undead being even just twitching, my heart would stop. Another moment of note is when the character’s are taking a pit stop in the forest, and they start hearing signs of other life (Or lack thereof) around them. Such was the power of the editors. The soundtrack was composed by first-timer Cristobal Tapia de Veer, and honestly, it’s not that memorable or noteworthy of a score. It’s pretty similar to other films of its kind in terms of style and structure. Moments of intensity and violence are backed by rigid guitar and pulsating percussion, while quieter moments are bolstered by emotional strings. But the key difference here is that the score also incorporates ambient sounds of nature, chaotic vocals, and the outside world. In a way, this further immerses the audience into a decaying world with the broken remains at our feet. Aside from that, I won’t be going on YouTube to replay certain tracks. There’s really nothing left that I can add. Almost everything about this movie worked for me, and tells a story with a big scope on an intimate scale. And that’s what makes it such a mini-triumph. The Girl With All the Gifts is a breath of fresh air in a dying genre. It’s currently available on Amazon Primer, and I implore you to give it a chance. It’s one of the year’s most overlooked films. 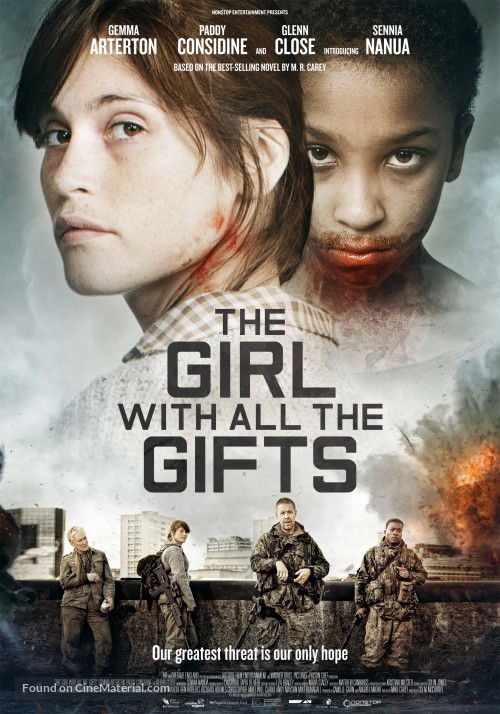 1 thought on ““The Girl With All the Gifts” Movie Review”