This movie represents the best type of advertisement out there: Get up off your butts and go make a difference. This darkly comic crime drama won the top prize of People’s Choice Award at the 2017 Toronto International Film Festival back in September. Following a relatively limited released on November 10th, the film has already made back its $12 million budget and will no doubt continue a strong run thanks to strong word-of-mouth and rave reviews from critics. Written and directed by Martin McDonagh, the playwright behind the films In Bruges and Seven Psychopaths, the screenplay was reportedly conceived back in the early 2000’s when he saw billboards similar to the ones in this movie while traveling through America. He apparently shaped the story around the question of “Who would put up something like that?” Set in the titular small town, Frances McDormand stars as Mildred Hayes, a woman whose daughter was raped and murdered 7 months prior. Frustrated with the lack of progress on the case, she rents three billboards just outside of her town condemning the police department. This leads to a war with the cops, particularly the chief and one racist officer, several townsfolk, and her own family. But hopefully, this can get them to find a new suspect and bring it all to a close. No, I have not yet seen the director’s debut feature In Bruges, though it is high on my watchlist. But I have seen, and enjoyed, Seven Psychopaths, an underrated black comedy with Tarantino-esque dialogue and circumstances. So in that, I knew I had to keep an eye on Martin McDonagh and the projects he’d potentially undertake. And when I first heard about this movie, two thoughts ran through my head. First, this is ridiculously relevant to the current anti-police climate being felt in many areas of the country. Second, how did he come up with such a cool concept? I wanted to see how he’d approach the subject matter. And he has come up with one of the year’s best films. What I appreciated most about the film is how realistic it was. One of my complaints about Seven Psychopaths was that the story felt too ludicrous at times and sometimes felt like style over substance. Three Billboards is almost as if McDonagh heard those responses and decided to get down and dirty in this small town. The dialogue is once again brilliantly written and endlessly profane. The characters have no problem saying some really inappropriate things to each other, some on a regular basis. Virtually every single swear word that you can think of is probably said in this movie, but not in a gratuitous way. It feels like this is as close to reality as could be done if a situation like this were to actually occur. It was unexpectedly funny and, at times, sobering. Frances McDormand is already a legend for movies like Fargo, but she honestly gives the best performance of her career in this film. She curses like a sailor, smokes like a dealer, and is mean to everyone who opposes her actions, but still incredibly thoughtful and deeply troubled. My favorite scene is when a priest asks her to take down the billboards and she goes on a diatribe about how gang laws passed in the 80’s related to priests who are “culpable” to abuse. A pointed, if cynical observation. Woody Harrelson portrays the irritated yet sincere Chief Willoughby, a man who clearly wants to do some justice, but has to deal with rotten apples. One of those apples is Sam Rockwell, who turns in a brilliant role of a racist, drunken cop. Though the character could be easy to write off, Rockwell gives him shades of pity and foolishness as we see he’s nothing more than a product of his environment. And while the rest of the cast, especially Lucas Hedges as Mildred’s troubled son and Peter Dinklage as a funny yet insecure townsmen, do a great job, it’s these 3 actors that are at the forefront of the drama. Let’s take a minute to discuss the technical attributes of the film. Previously a favorite of the Marvel Cinematic Universe, cinematographer Ben Davis uses natural lighting and washed colors to get the accurate look of a small town. Whether we’re on the side of the freeway with the titular billboards or inside neon-lit bar with the characters, we’re always there in the moment. McDonagh’s background as a playwright means that single-location scenes are always engaging, but he makes sure that something else happens to keep the audience’s attention. The edits by Jon Gregory between stuffy indoor rooms and open-air environs outside is rather clever. One of the most memorable sequences is when one character goes on a full rampage, and it’s all taken on a single, handheld shot. I wouldn’t necessarily call this an “action scene,” but it definitely kept me on the edge of my seat. The soundtrack is brought to us by Coen brothers collaborator Carter Burwell. (Which is fitting since this feels like a film they would make together) Compared to most other musical scores this year, it’s a rather simplistic one, but undeniably effective. Most of the tracks consist of the rhytmic blues-like beat of a guitar and hand percussion, giving off the effect of armies marching to war. It also contains real-world songs of country or rock in the background, but their names aren’t coming back to me right now. And in some instances, there is no music. This, I feel, allowed some of the more powerful scenes to breathe. My major issue is about the ending. It made sense for the sake of the story and ended on an unconventional note. But you’ve just spent 115 minutes with this town, and it felt stretched out a little. I’d have liked to watch at least one more scene. In any case, Three Billboards Outside Ebbing, Missouri finds its outstanding cast reveling in searing comedy. The perfect blend of pitch-black humor and frighteningly real drama. 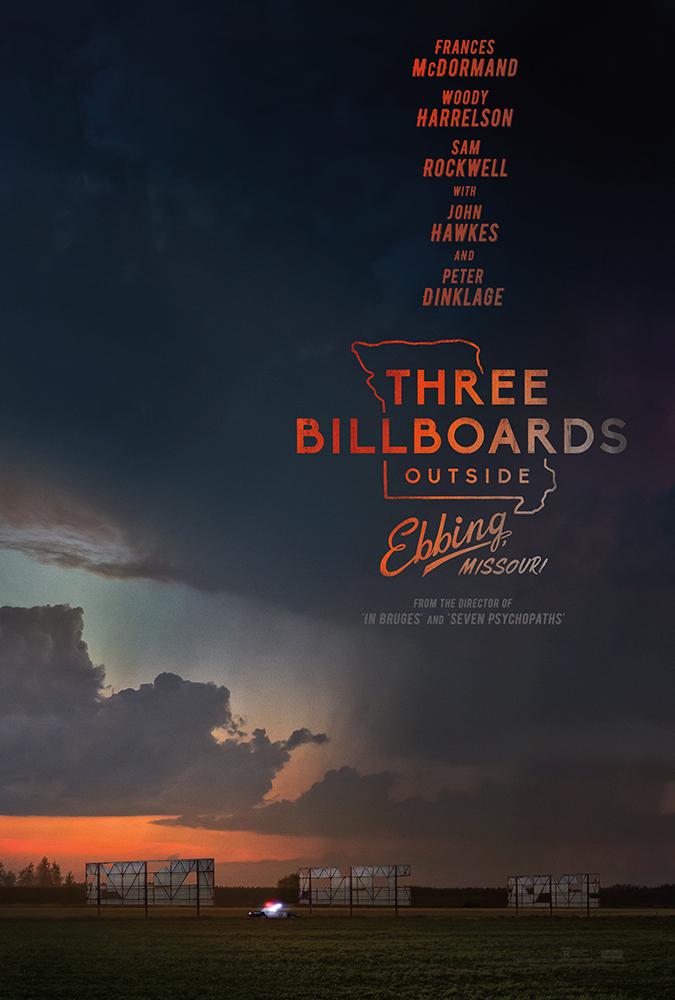