I know that the advertisements for Darkest Hour sell it as the newest completely generic Oscar-bait biopic about the life of yet another highly revered historical figure. And while it’s tempting to make such a write-off, please give Darkest Hour some benefit of the doubt. This historical war drama premiered at the Telluride Film Festival at the beginning of September of 2017. Following another screening at TIFF 10 days later, it received a limited release on November 22nd, 2017. After it went wide a full month later, it has struggled to make back its $30 million budget. Directed by Joe Wright, after it was announced, half of the cast had to be replaced; namely, the late John Hurt. But Oldman was always the choice to play the central character. Set in May of 1940, the early days of Britain’s involvement in World War II come to a head when Nazi Germany shockingly encroaches in on their position. After Nevel Chamberlain is proven to be incompetent in wartime, Winston Churchill is appointed the new Prime Minister. Facing opposition from within his own party to surrender to Hitler’s regime, he must overcome the odds of politics and unite the nation against their enemy. If this had come out in 1999, this movie would have already been the clearest contender for Best Picture. But now after the Academy went through drastic changes following this year’s Best Picture debacle, many are looking at movies like this and scoffing with pride. “That’s just old-fashioned hagiographic garbage” they might say, and they’d be forgiven for saying so. Studios are afraid to make these kinds of movies anymore. Especially if they’re World War II movies, then they have to REALLY work hard to get some recognition from just beyond the middle-aged white man. However, I’m here to tell you that Darkest Hour is worth a recommendation to general audiences. What makes it so enticing is its handling of the famed Operation Dynamo, where 400,000 soldiers were to be rescued from the beaches in France. That rescue was the centerpiece of another excellent war movie from earlier this year, Christopher Nolan’s Dunkirk. The two make a perfect companion piece, quite possibly the best one in years. But whereas Nolan’s film was an experimental and neverending barrage of intensity, this movie shows the machinations and how Dynamo came to be. We see the surprising amount of opposition to continuing war against Hitler, despite Churchill having warned the country about him decades earlier. As the man himself puts it, “You cannot reason with a tiger when your head is in its mouth!” Speaking of Churchill, the rumors are indeed true: Gary Oldman’s performance is something stunning to behold. Behind the thick makeup job and cloud of smoke from Cuban cigars, he gives us a man put into the right position at the wrong time. Energized by a ticking clock of Britain’s doom, a powerful orator is unveiled who is never afraid to speak his mind with an extensive vocabulary. But we’re still given a human being who is terribly conflicted on his job and has problems socializing with other people; the first time we meet him, he’s in a thin bathrobe in his bed. If Oldman doesn’t get a nomination for Best Actor come January, I will be very surprised. In fact, he’s so good that he almost overshadows the rest of the great cast. Although she isn’t given too many scenes, Kristen Scott Thomas does great work as Winston’s wife Clementine. A strong-willed woman, she is always at her husband’s side even as he fumbles in politics. Game of Thrones alum Stephen Dillane is given a lot to do as Foreign Secretary Lord Hallifax. Despite initial support for Churchill, his paranoia gets the better of him as his party seeks the agenda of peace talks. Ben Mendohlson is restrained and nuanced as the terrified King George VI, while the young and beautiful Lily James provides a nice surrogate for introducing us to the world of this man. As much of a showcasing for top-notch acting, Darkest Hour excels in its technical aspects. Previously nominated for work such as Amelie and Inside Llewyn Davis, cinematographer Bruno Delbonnel plants us in the middle of these stuffy cabinet room meetings. Underneath a distinctive film grain, we see many colors desaturated into murkier shades of grey or white. This permeates the feeling of hopelessness felt in many during the time of this terrifying war. Most of the compositions are of close-ups, which makes sense since most of the movie is just talking heads trying to figure out what to do. But he makes sure to keep the audience on their toes as he never loses sight of the urgency of the story. While it’s all of Steadicam, there are many quick cutaways between conversations which makes it more riveting. Meanwhile, Dario Marinelli brings us a musical score that matches the grand urgency of the situation. With help from pianist Vikingur Olafsson, he crafts a slew of memorable melodies. The piano is almost always contrasted by swift strings or bouncing percussion such as the timpani. I definitely think that it shouldn’t be overlooked by the Academy in Best Original Score. Carried by the best male lead performance of the year and featuring some desperately needed speeches in these dire times, Darkest Hour is a rousing and energetic look at a powerful figure in history. Gary Oldman will most likely get a nomination and may even win, but it’s Joe Wright’s brilliant direction that brings the whole thing together. 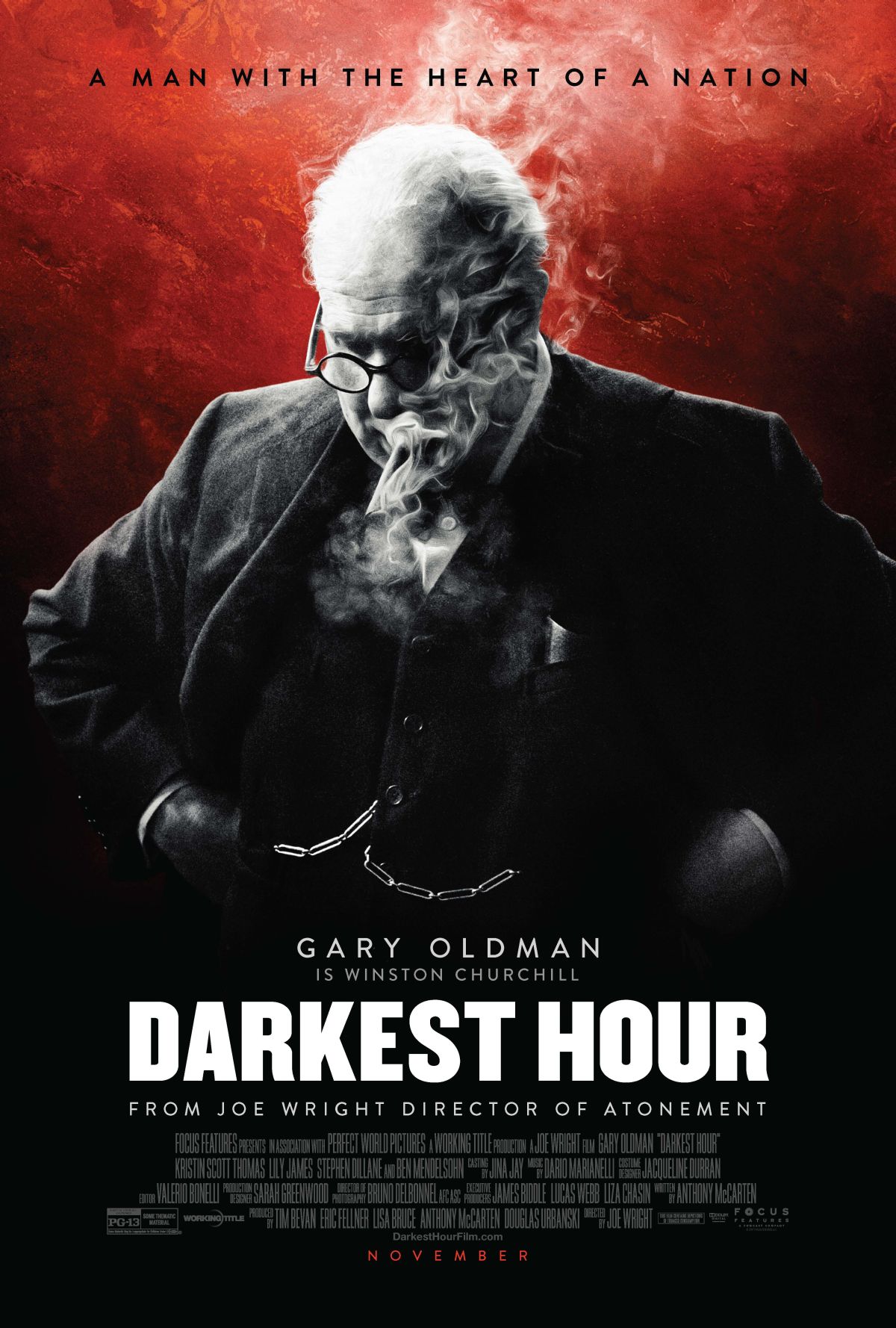