Now that my Top 20 Best Films is published and out of the way, I wanted to go into more specific categories with Superlatives. No specific rankings here, but I just wanted to file away certain films that I saw that deserve at least some recognition. Some of these were in contention for the Top 20, others were not. But regardless, I wanted to continue my tradition from last year and give some thoughts on these.

In my experience, Bong Joon-Ho’s films can range from hitting the exact spot that they should hit or struggle to decide what tonal path they want to take. Okja is a mixture of both but there’s no denying how it is unlike anything else that’s pouring out of the studio market these days. The concept of a child forming a close bond with a creature may be familiar, but the way that Joon-Ho goes about it in this Netflix original is so unexpected and exhilarating. Filled with both heart and searing satire, this is the kind of film that more studios and production companies should be putting faith in.

I had little doubt in my mind that Pixar Animation would score more laughs and fun out of the audience with Coco. But what shocked and particularly impressed me was the deep respect and reverence the creators had for Mexican culture, which is often overlooked or misappropriated by Hollywood. Moreover, the film was surprising in its examination of death and the afterlife, a topic rarely discussed in family pictures. Topped off with some of the most gorgeous visuals the animators have had to offer yet and a beautiful score by Michael Giacchino, Coco is a glorious return to form for Pixar.

Now, this just makes me sad because I really wanted to like this movie like everyone else. And while I did enjoy parts of Atomic Blonde, nothing could overcome the excessive feeling of “all style and no substance.” Charlize Theron and James McAvoy are great in their respective roles and seem to be having a lot of fun. But the spy plot needlessly and constantly twists itself in a tangled up knot to hide its inherently generic nature. And while the color scheme and use of graffiti are nice, it ultimately feels indulgent.

I know a lot of people who not only disagree with my choice on this category, but they don’t like Mother! Not at all. And honestly, I can’t blame them since the film has no regard for the audiences’ comfort level. But for me, growing up in a religious household, seeing this allegory played out with total control unleashed from Darren Aronofsky is exactly the kind of disturbing I look for. My jaw was on the floor for the last 30-45 minutes of the movie, and the controversy this film has accumulated for its plot and violence is exactly the kind of conversation that film buffs should be having.

Most Overlooked: “The Girl With All the Gifts”

One could attribute this film’s relative lack of success to the overcrowded zombie genre, and you’d probably be right. But unlike many other films in that worn out niche, Colm McCarthy’s The Girl With All the Gifts has an effective emotional core in the midst of all the flesh-eating terror and guts. Featuring a breakout performance from Sennia Nanua and some chillingly real zombie effects, the film feels like a believable examination of what would happen to children in the collapse of society. It’s probably the closest we’ll get to a live-action adaptation of The Last of Us.

“It’s like a nuclear bomb that grants wishes!” An actual line of dialogue from this huge let-down. I’ll give Netflix some credit here; they tried. In an age of studios whittling visions down to empty projects, Netflix actually tried to make an original fantasy blockbuster. They’ve even committed to a sequel already! But David Ayer’s Bright failed not just at setting up a potential franchise, not just at pathetic social commentary, but also at the most simple job: making a good movie. Max Landis seems to have a ton of ideas floating around his head, but someone really should have given this one a total rewrite. Sorry, Will Smith and Joel Edgerton, I love you guys. But make better choices.

Aside from Get Out, I can’t think of a single movie from 2017 that caught more people by surprise than The Big Sick. Revealing Kumail Nanjiani as both a brilliant screenwriter and a capable actor, the awkward true story speaks volumes about current cultural barriers without ever becoming too preachy. It is increasingly rare to find honesty or sincerity in romantic films, but Nanjiani, along with his co-writer (And real-life wife) Emily V. Gordon do just that. It doesn’t avoid the emotional weight of a loved one falling ill, but they still find genuine humor amongst it all. Capped off with the single best and most unexpected 9/11 joke in cinematic history. 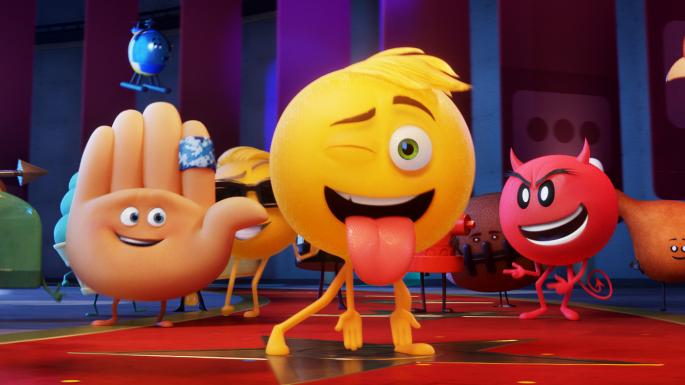 In all honesty, who was actually expecting this movie to be any good? When I first heard the announcement, I thought it was an article published by The Onion, but nope. Even so, I might be willing to subside some criticisms if Tony Leonidis and T.J. Miller really put some muscle and effort into it. But The Emoji Movie not only comes across as lazy garbage but also a stupidly cynical feature-length advertisement for various corporate phone apps. Rarely have I seen a movie that is so blatantly insulting to the intelligence of both adult AND child audiences. (Sir Patrick Stewart as the poop emoji included) The Emoji Movie is easily the worst movie of the year, and the worst animation I’ve seen yet.