Chasing your dream project for years on end can typically be a respectable endeavor. But when they result in something like this, maybe it wasn’t the best idea. This poorly conceived cyberpunk dystopian sci-fi drama was released by Netflix on February 23rd, 2018. Although its actual budget remains unknown at the moment, the film received a wave of negative reviews from critics. Written and directed by Duncan Jones, the same man behind Moon, Source Code, and (Unfortunately) Warcraft, the film is purported to be a passion project of his, with the earliest draft being written back in the 2000’s. Jones himself has described it as a spiritual sequel to Moon, and there’s even a scene with Sam Rockwell cameoing in his previous role. Set in a futuristic version of the city of Berlin, Alexander Skarsgård stars as a mute Amish bartender named Leo who struggles to stay in touch with the technological world around him. After a fateful night, his girlfriend Naadirah, who works at the same club as him, vanishes without a trace. As she is the only person who truly communicates with him, Leo follows a series of clues in Berlin that ropes him into a world of prostitutes, black market dealers, and two American army surgeons who seem to be the center of it all. To be upfront here, unlike many other critics that have reviewed this film, I have not seen any of Jones’ previous works. I do plan on watching Moon and Source Code soon, but Warcraft is one I’ve been hesitant on. Seeing all the bad press that that video game adaptation received, one would hope that he would be able to bounce back from it. And for a long while, this Netflix Original was one of my most anticipated movies of 2018. Even after reading some of the negative reviews, I figured this movie couldn’t possibly so terrible and unwatchable, right? Well… it’s pretty bad, guys. It’s also a damn tragedy for me to say this because Duncan Jones tried to get it off the ground for several years. The son of the late David Bowie (Who’s given a heartfelt tribute in the end credits) promoted it heavily on social media, sharing set photos and concept art almost daily. And that’s all great and dandy. Anyone who wants to make a lifelong passion project and share it with the world has already got my vote. Moreso than that, I always support anyone who wants to make an original science-fiction movie on a big studio budget. Netflix marketed this as their next big blockbuster, much like last year’s Bright. Also, like Bright, Mute fails at being either compelling or intriguing. Skarsgård has impressed me in past films with his performances, but something with Leo just felt off. I know it’s incredibly hard to act without any words, and he does a good job in some scenes, but most of the time he feels annoying and stupid. And that entire thread of him being an Amish man just feels tacked on. His girlfriend, Seyneb Saleh, isn’t any better and spends her spare moments whining and begging for a man. Ant-Man himself Paul Rudd is by far the best performer in the entire film as Cactus Bill, one of the American surgeons. Though his demeanor is uneven and acts like a conceded jerk, he clearly looks like he’s having the time of his life and is (mostly) able to power through the clunky dialogue. His best friend, played by Justin Theroux… is a pedophile. That’s not an exaggeration; Theroux’s character has a sexual attraction to young children in this movie. Admittedly, he does a fine job at being creepy and uncomfortable but the fact that it is played off like some sort of joke is wrong and honestly gross. As far as the technical aspects go, Mute doesn’t have too much going on that separates it from the cyberpunk noir genre. From the neon-soaked streets of night-time Berlin to the filthy interior buildings, the production designers try really hard to be like Blade Runner, a movie that will, unfortunately, get many comparisons to. The cinematography by Gary Shaw often opts for long wide shots, especially for some of the action sequences. Though it does provide a sense of character for the setting, showing as much of the world as possible without being too disorienting. Surprisingly, there’s a sparse amount of CGI used to create this futuristic setting, mostly relying on practical sets and oddball costumes to bring it to life. It definitely adds up to a grimy, lived-in feeling that it’s unfortunately unable to rise out of. Clint Mansell, one of the most versatile composers in the industry, gives us the musical score for this film. Taken as a whole, it’s exactly what you’d expect from a picture like this. The vast majority of the tracks consist heavily of synthesized beats and melodies, some of which seemingly go on indefinitely. On occasion, a new bit of percussion or strings were come in and reach for sentimentality in the story. Although that aspect failed, the soundtrack itself is actually pretty good to listen to and helps establish the somber tone of this world. But the film overall is wildly uneven in both pacing and tone. The first half is a slog to get through and even though it admittedly goes out on a high note, it would be perfectly reasonable if you turned it off by then. And the film seems unsure of whether it wants to be an all-in sci-fi extravaganza or a contemplative noir drama. Mute is a visually appealing busfire devoid of charm or pleasant characters. I could see why some people actually like Warcraft, but I have a hard time seeing anyone enjoying this Netflix Original. It makes me temper my expectations for all of their future content. And the saddest part of all is that, at the end of the day, Duncan Jones has nobody but himself to blame for this. 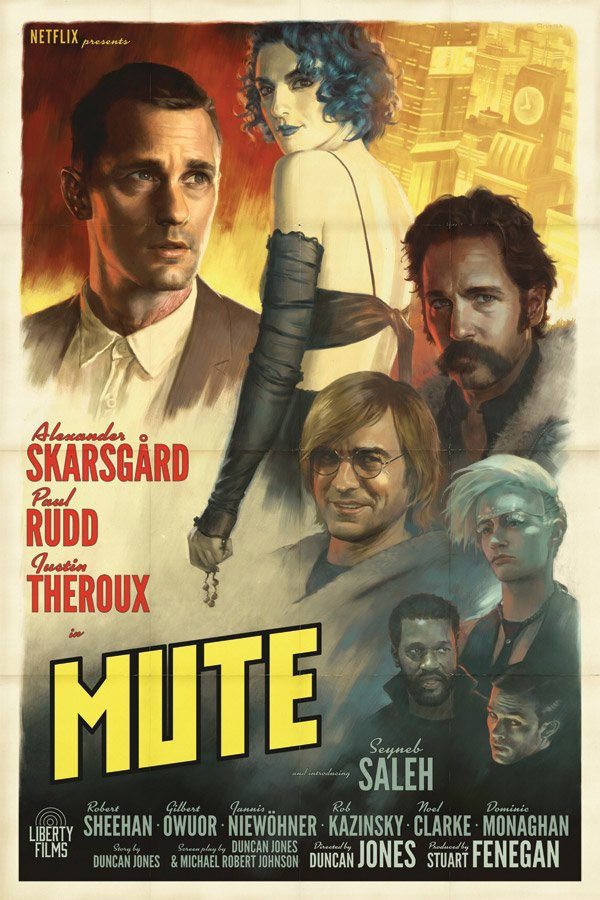