Well… Those were certainly some decisions. Both decent and bad. This biographical crime drama premiered at the Telluride Film Festival, followed by another screening at the Toronto International Film Festival. It later released on September 14th, 2018, after many pushbacks on the release date throughout the last several months. Thus far, it has grossed around $3.5 million against a $29 million budget and should be able to recoup its whole cost by the end of its theatrical run. Directed by Yann Demange, who previously the critically acclaimed thriller ’71, the story behind the titular criminal was largely unknown by the public until an article called “The Trials of White Boy Rick” by Evan Hughes in 2014. This quickly caught the attention of producer Darren Aronofsky, and in February 2015, Columbia Pictures picked up the spec script written by Noah and Logan Miller. Based on the true story, we begin in 1984 Detroit at the height of the crack cocaine epidemic in America. Richard Wershe Sr., played by Matthew McConaughey, is a struggling gun salesman attempting to keep his lower-middle-class family afloat while also wanting to steer them clear of lives of crime. His son Richard Jr., played by Richie Merritt, starts gaining a name for himself on the streets with other criminals his age. Nicknamed “White Boy Rick,” he soon becomes a drug kingpin and the youngest FBI informant in history- just at the age of 14 and 15. Although I have yet to watch ’71, I could tell just from the few clips I’ve seen that Yann Demange is a talented new filmmaker with a strong grasp on control. So count me among the people excited for his debut with a Hollywood studio, especially with such a relatively lowkey yet fascinating story. I had never even heard of Ricky Wershe Jr.’s story before watching the first trailer, so if anything this had the experience to be an entertaining learning experience. Unfortunately, while White Boy Rick is undoubtedly dealing with an incredible story and cast, there’s quite a bit missing that keeps it from being totally great and involving. I read a review a while ago that alleged how White Boy Rick was unintentionally racist in its dealing with various characters. Specifically, how Ricky, a poor white kid, and his family are drawn into shady things happening within a predominantly African-American setting and how the film treats him compared to the black characters. Sadly, I would have to agree with that sentiment, because the screenplay treats Wershe Jr. as the victim of an unfair, overzealous justice system as soon as the consequences for his criminal actions come up. But that’s not the main thing that keeps White Boy Rick from being a great movie; what keeps it from being a great movie is the simple fact that it chooses to address his involvement with crime and the FBI in a chronological order without much time to dwell on the implications of certain things that happen. And that’s just a bland way to go about something like this. For what it’s worth, newcomer Riche Merritt is certainly something of a discovery as the titular teenager. With an authentic Detroit accents and rugged looks, he does a fine job portraying a young man who went through more drama in his adolescence than most adults experience in their whole lives. The real scene-stealer is obviously Matthew McConaughey as Rick’s father, perhaps the most moralistic gun salesman I’ve ever seen. Profane and unhandsome, he does whatever he can to protect his family and is unafraid to lay down the law on both his children. The two of them are flanked by overqualified supporting talent that do the best possible. These include Jennifer Jason Leigh and Rory Cochrane as two pragmatic FBI agents, Bel Powley as Rick’s drug-addicted sister, Jonathan Majors as a major drug lord, and Atlanta star Brian Tyree Henry as a hotheaded narc. Meanwhile, the technical aspects of White Boy Rick make it easy to understand why Yann Demange is an exciting young talent. Tat Radcliffe’s stark, handheld cinematography is both disorienting and deliberate, creating a cinéma vérité style. It also makes use of some long shots to drag out some elements, such as driving an abusive boyfriend out of a home. With the pale, muted colors of the wintry Detroit, there are a number of instances where the filmmakers make it seem like we’re a fly on the wall, observing these events in person. The editing by Chris Wyatt is almost as shaky as the camera itself, moving between multiple shots and cuts in one scene after another. One of my favorite instrumentalists Max Richter, in his 8th film in 3 years, composes and conducts the film score. Like some of his best works, this soundtrack is very lowkey and minimalist in its approach, allowing the emotions to come out organically without feeling overly sentimental. Still, the steady synth melodies play off a sort of melancholic tone, as if prophesizing the eventual downfall of the titular character. The soundtrack also utilizes numerous obscure songs from the mid- to late-1980’s, most of which are dance songs played in nightclubs. However, I’d be a stone-faced liar if I told you I could remember any of the song names, or most of the original music for that matter. White Boy Rick is a sadly uninvolving waste of talent and powerful messages. Despite strong attempts from Yann Demange and the cast to keep things interesting, the bland structure and questionable portrayals just bury it under a pile of other fact-based pictures. What a fascinating story, what a problematic adaptation. 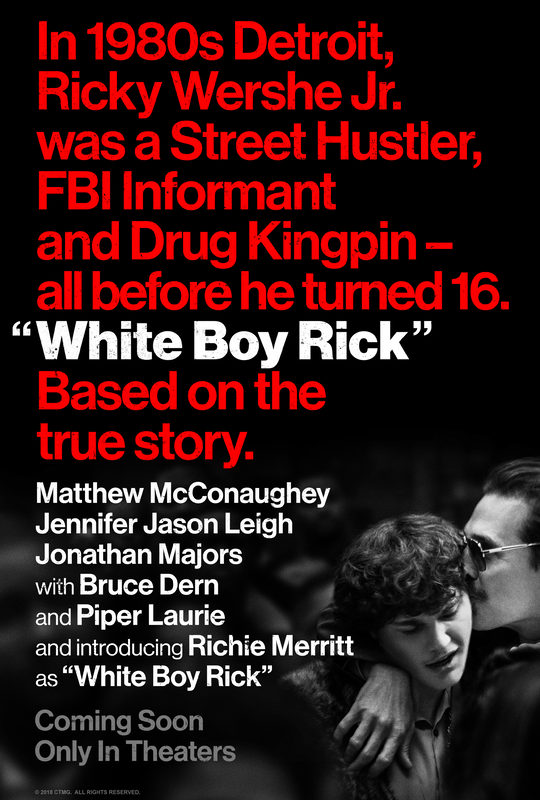