The lengths I would go to protect my sister.

This computer-animated family fantasy film was released in theaters worldwide by Disney on November 22nd, 2019. Following the biggest opening weekend of all time for an animated feature, it has gone on to gross over $1.268 billion at the global box office thus far. This almost puts it financially up to par with its predecessor in a shorter amount of time. With a little more time, it has managed to become the most successful animated film ever released, in addition to the positive attention it’s gotten from fans and critics.

Once again co-directed by Jennifer Lee and Chris Buck, the filmmakers and studio had constantly talked about a sequel to the 2013 hit for a couple years before officially moving forward. Lee worked on several different drafts alongside Allison Schroeder, although the latter ended up not getting a real credit for the screenplay. The actors’ recording for dialogue and songs supposedly began as early as late 2016, though the veracity of these claims is disputable. The studio also worked in close collaboration with various experts and representatives of the Saami people to get some story elements culturally accurate.

Set 3 years after the first film, Idina Menzel and Kristen Bell return as Queen Elsa and Princess Anna, who have managed to keep the kingdom of Arendelle in prosperity. One night, Elsa begins hearing a strange voice singing repetitive notes to her and drawing her away into a mystical forest. There, the two of them alongside Kristoff, Olaf, and Sven- voiced respectively by Jonathan Groff and Josh Gad -travel there and discover a deeply rooted conflict between their kingdom and the natives of the land. Wanting to mend things before it’s too late, they also find that their journey may bring them closer to what happened to their parents.

The original Frozen, when it first came out in 2013, was a hugely pleasant surprise for me. It had all of the elements of a classic Disney movie (Memorable songs and heartwarming characters) while also finding interesting ways to invert the traditional format of the past. It was also an indisputably gorgeous movie with some of the best animation of its time and still looks stunning to this day.

It being far more successful than anyone had anticipated, a sequel to the film was pretty much inevitable. I was extremely curious to see how Chris Buck and Jennifer Lee would be able to continue the story, especially since Lee has been made the new head of Disney Animation following John Lasseter’s unfortunate exit. And while Frozen II is certainly a step down from the first installment, it’s still a great time at the movies with the whole family.

Just like last time, this movie is at its best when its questioning the usual tropes of a typical adventure story. Despite what the people around her seem to think, Elsa is neither a villain nor a damsel in distress; she’s just unsure of how to rule a kingdom and manage her mysterious powers at the same time. Similarly, Anna wants to be the princess who falls in love and gets married, but she also learns how to retain her own agency and doesn’t want to be defined either by her sister’s status or her romantic relationship with Kristoff.

Where Frozen II starts to falter is that, while it acknowledges change as something inevitable and even positive, it still doesn’t quite make enough narrative progress to be fully satisfying. It’s undeniably cool to see this world grow beyond the kingdom of Arendelle and even see the potential origins of magic in this universe. Still, by the end, you can’t help but feel that they played a little too safe for its own good, particularly because of how it teased something that could have been much more.

Idina Menzel is still just as iconic as she was in the first go-around, and cements Elsa as one of the most interesting monarchs in Disney’s library. Still unsure of her capability as a leader, she strives to find a balance between the powerful and humble, thinking distance is the safest option for her loved ones. Her voice is still a powerhouse as always and she releases all of her worries and troubles into song whenever possible.

Also, Kristen Bell is charming and delightful as ever as she returns to the role of Anna. Her own sense of confidence and self-worth have grown immensely since the previous film, but she still cares deeply about the fate of her sister, willing to do whatever it takes to keep her happy.

Josh Gad also makes a return as Olaf, the magical talking snowman. He proves to be much more fun and likable as a side character than a protagonist, and brings out some of the biggest laughs of the whole movie. He also has a newfound sense of wisdom and maturity in this film; although much of it proves to be him misunderstanding its true meaning for comic effect, it still creates an interesting dynamic with the others.

Jonathan Groff, Alan Tudyk, and Ciarán Hinds all reprise their respective roles from the first installment while Alfred Molina, Evan Rachel Wood, Sterling K. Brown, Martha Plimpton, and Norwegian singer Aurora come in new ones. All of them bring different weight and while not all of them get a chance to sing, they’re memorable for the most part. Woods and Brown were particularly interesting and I was hoping to see more from their parts than we ultimately did.

And from a technical point of view, Frozen II proves that even after 58 animated features, Disney is still able to make some real surprises. The animation in this movie is somehow even more stunning and rich than the previous one, utilizing 3D animation to its full potential. The stupid amount of detail in everything in every frame, even the hair or fabric of a character’s wardrobe, is jaw-dropping. Not to mention the remarkable physics being displayed on-screen throughout.

There’s a heavy emphasis on the colors blue and orange. We see all different shades of blue in the film, from the ice emitting from Elsa’s powers to the deep blue of the ocean. For orange, it’s mainly an autumnal look from fall leaves and even Anna’s brunette hair has a bit of orange in it. It plays up a nice contrast in the visual composition, representing the contrast between the life the main characters want to live versus the adventure they’ve embarked on.

Songwriters Kristen Anderson-Lopez and Robert Lopez return from the first film to provide a whole new soundtrack here. And with the help of composer Christophe Beck, they’re able to create a bounty of memorable new songs. The big one is obviously “Into the Unknown,” a powerful ballad that allows Idina Menzel’s powerhouse vocals to work magic. It uses the motif of light and uncertainty to a great advantage as it builds and builds, much like Elsa’s confidence.

But for me, the best song of the film is “Show Yourself,” which comes in the latter half of the story. The natural culmination of all the elements that have come before it, it’s a true showstopper as Elsa finally comes to terms with her abilities and their implications. It also features the vocals of Evan Rachel Wood, who proves to a worthy song partner as their voices collide. The animation of the scene that song plays in is some of the best in the whole movie, and both come together to create something special.

More safe and fun than forward-thinking, Frozen II is a perfectly fine family-friendly romp with gorgeous animation and great music. While it doesn’t take as many risks as it probably should, Chris Buck and Jennifer Lee are still able to deliver a fun sequel to its immensely successful predecessor. The vocals of the cast are all still excellent and the Lopez’ give them new tunes worthy of the gold voices singing them.

I think part of what made the first Frozen so surprising and special is that it defied expectations and subverted several of the classic Disney tropes. This sequel still understands those tropes exist, but is more content to coast on the comfort of the characters from last time. Even if it means it has to miss out on what could have been some truly exciting storytelling opportunities here. 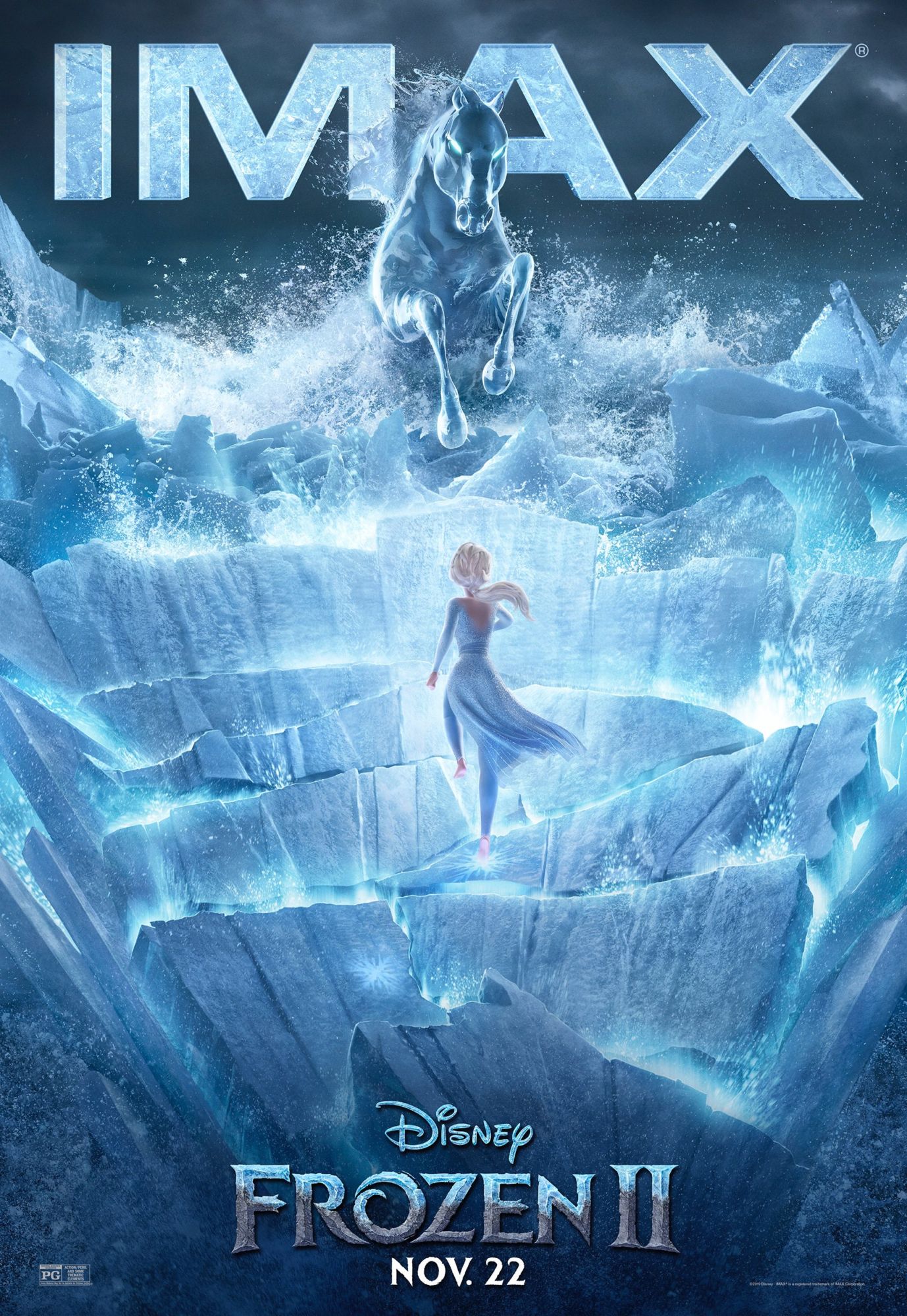